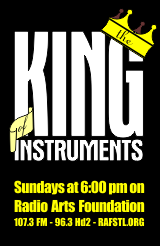 The King of Instruments is a one-hour show airing Sunday evenings at 6:00pm on Classic 107.3 FM in St. Louis. It is a joint production of the St. Louis AGO and the Organ Media Foundation. Hear it in the St. Louis region on 107.3 FM, 96.3 HD2, or you can listen online from anywhere in the world at rafstl.org.

Email us your questions, suggetstion, requests, and comments at koi@agostlouis.org

A native of St. Louis, William Sullivan holds Bachelor and Master Degrees from Washington University and received his doctorate from Indiana University School of Music, where he studied with Robert Rayfield and Oswald Ragatz. Over the years Sullivan has worked as a church musician, recitalist, conductor, and editor. He also has worked extensively in musical theater on and off-stage, taught at Kenrick-Glennon Seminary. He continues to serve as organist at Laclede Groves Chapel, perform for American Theater Organ Society events, and has been a regular on the Third Baptist Friday Pipes series since its inception.

Sarah Bereza is the Minister of Music at the First Congregational Church of St. Louis. Her writing and podcasting includes Music and the Church, a monthly show featuring interviews with musicians and scholars of Christian congregational music. Her doctoral research (PhD, Duke University) focused on music and theology in conservative evangelical churches. Previously, she earned master’s degrees from Duke University and the University of Cincinnati, College-Conservatory of Music, and an undergraduate degree in organ performance from Bob Jones University. You can find Sarah’s resources for church musicians and other creatives at sarah-bereza.com.

Matthew Palisch has served as the Director of Music and Organist for St. Paul Lutheran Church and School in Jackson, Missouri since 2008. He directs an expansive music ministry in both the church and school comprised of five children’s choirs, Kantorei, the Joyful Sound Ringers and a concert series which showcases local talent as well as professional musicians from around the country. Palisch has also served as Professor of Organ at Southeast Missouri State University’s Holland School for the Visual and Performing Arts since 2011. He holds bachelor degrees in music education and organ performance from Southeast Missouri State University and a masters degree in organ and church music from the University of Iowa. His organ teachers have included Gary L. Miller, Delbert Disselhorst, and Brett Wolgast. Mr. Palisch is active in the American Guild of Organists, the Royal School of Church Music in America, the Association of Lutheran Church Musicians, and the Organ Historical Society.

Matthew Gerhardt serves as Assistant Minister of Music at St. Paul’s Lutheran in Des Peres, Missouri. Previously, Matt was Assistant Organist and Choir Director at St. Paul’s Episcopal Church in Indianapolis, Indiana. He received his Master of Music degree in Organ Performance from the Indiana University Jacobs School of Music, where he was in the studio of Dr. Janette Fishell. During his time at IU, he studied improvisation with Robert Nicholls and Bruce Neswick. Matt received his Bachelor’s degree in Parish (Sacred) Music from Concordia University Wisconsin, where he studied organ with Dr. John Behnke. Following his time at Concordia, Matt spent a year enrolled as a guest student at the Hochschule für Kirchenmusik in Herford, Germany. While in Germany, he studied organ and improvisation with Stefan Kagl and received the top score of 1,0 (excellent) on the MA-level organ performance exam.

Elsie Parker and The Poor People of Paris

Pleased to Meet You